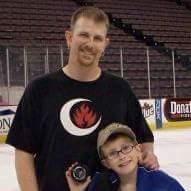 First and foremost Nathan was a father. He loved his son with all of his heart. He was a son, brother and uncle. Nathan was the strongest person I have ever known. He was very quick witted, funny and had the biggest heart. When someone needed an ear he was there, genuine advice he was there and would do anything for anyone. Nathan loved technology, science, history and absolutely loved to read. He was my oldest son and the center of our family.

Nathan was diagnosed with a brain tumor in 1997 and had surgery in January of 1999. The surgery removed the right temporal lobe of his brain which left him with many deficits, and severe headaches and pain on the left side of his body from paralysis. He suffered with seizures sometimes multiple times a day. He was given pain medication for many years, had a nerve stimulator implanted for seizures as well as a pain pump. All this resulted in addiction to opiods. When he started abusing the medication they simply cut him off, stopped filling his pain pump and left him on his own. I don't know when he started using heroin, didn't know until I received his autopsy report 12 weeks after his passing.

His sense of humor, his smile and his laugh. He called me almost daily and I miss that, I miss his voice.

I wish you would have told me about the heroin. I would have moved mountains to get you help. I love you Nate.