You Say You Don't Believe in Hell? Just Look an Addict in the Eye. 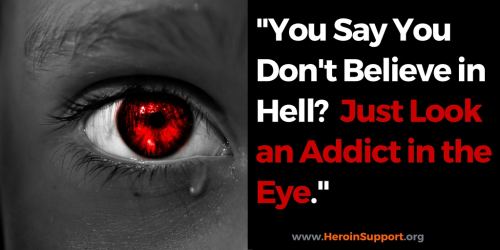 You say you don't believe in hell? Just look an addict in the eye, You'll think I'm safely at a friends- while I'm in some dirty bathroom getting high. I've always had high morals; Standards stacked against the sky, You sit watching as things disappear, but are too scared to ask me “why.” I stand there, right in front of you, so frail with bones so gaunt, You still don't know the lengths I'll take, for that one thing I so badly want.

Its getting harder to catch my breath, I'm drowning slowly in my soul, Spiraling. Swerving. Plummeting. I have completely lost control. Sputtering. Stuttering. Breath wreaking of decay- When will you finally hear the words that have been so hard for me to say!?! Perpetual exhaustion: I am awake yet sound asleep, A jaded narcoleptic- why am I always the blackest sheep? Scabs form on my skin- oozing thickly, with gangrenous decomposition, Isn't that offensive smell starting to throw up some suspicion? You've found me strung out on the floor, more times than you can even count. Eyes pinned. Drooling. Slurring. Another night for which I can't account.

I always seem to have the flu, you think my immunities have gone to hell, But how quickly you see me turn around once my body gets that hit. I have always had that mindset- to never live with much regret, Not even though I'm bankrupt- and to so many emotions, I'm in debt. I've lost all of my possessions- years of hard work right down the drain- I'll always curse the day I made the choice to stick that fucking needle in my vein. 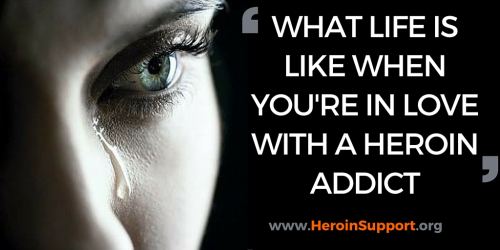 To fall in love with a person after you've been hurt multiple times is a pretty hard task as is. You will always have the fear of being hurt all over again and your trust won't fully be there. But to fall in love with somebody who later on becomes addicted to heroin seems to be at the top of my list of fears. Although I am living through this fear now and am at battle with it almost every day.

I fear many things when it comes to this evil drug that is killing many. Every day I see on the news or on Facebook that another loved one has overdosed and died. But what I also see is the attacks people are sending towards this brand new angel that was captivated by heroin. "He deserved to die." "Good one less drug addict off the streets."

I guess it all started for me last year. I met this absolutely amazing guy with so much ambition, love, and fun put into him. I loved everything about him. And when I found out I was carrying his child, I loved him even more. I still do. It wasn't until he was coming home with pin point pupils, itching himself, and hardly sleeping at night that I realized he had a problem. And for all I knew, after growing up around opiate users, I figured it was just Percocet that he was high on. I shrugged it off until the night I became scared of waking up next to somebody cold and lifeless.

I was sleeping and woke to a sound of him sort of choking out his last breath. It was the noise you hear when somebody does a whip it, and loses oxygen to the brain. Usually, in those times, I see people pound their fist on the person's heart reviving them. So I yelled his name and did exactly that. Nothing had happened. Once a person overdoses I can tell you, it is one of the scariest things I've ever experienced. Being inexperienced and not knowing what to do while the love of your life and father of your child is lying there struggling to live is horrifying. But he also looked as if he was in a peaceful state of mind, feeling warm and not wanting to wake up. It was truly terrifying. As I couldn't bring him back, he started turning blue. His lips were blue, and his face was grey. Just like my brother looked laying on a hospital bed. I also noticed his heart was beating very fast and he was sweating profusely. Cardiac arrest was soon to set in, I imagined.  After I couldn't do anything to help him, I got help from his father. He did chest compressions on him as I called 911. Soon he regained consciousness but fell back into a peaceful slumber shortly after. We finally got him fully up when the police showed up and he was confused as to why I was crying like I was and why there were police at our home. We then talked that night after he refused the hospital. Talking was the only thing I could do to make sure he wouldn't fall asleep. He promised not to do it again.

Now promises go a long way when you actually keep them. But we live in a world where the word promise is simply just a word. He stayed clean for quite a bit. I thought the worst of it was over. Until he came home high, a couple more times. And then a countless amount after that. Soon he overdosed again. We were able to get him back a second time.

To love a person with a heroin addiction is the constant fear that one day you're going to wake up next to them, just to find out you have made it but they did not. You live in constant fear that whenever they make a noise, you shake them just to find out it was a snoring and not another OD. When they don't answer your texts or calls you fear they have overdosed in their car or in their bed while you're at work. You fear you won't be with them the next time this happens, and you won't be able to help them. You fear your son or daughter will have to grow up hardly knowing their father, and that kills you and puts a knot in your heart more than anything. You fear if you chose the alternative and leave that you can't help this person when it happens again.

You check their skin in the morning when you wake up, you feel their face and make sure it's warm. You check their chest and see if it's moving whether you have to stay up all night or when you wake up that morning. It doesn't matter how many times you tell a heroin addict you're going to leave, and it doesn't matter if you leave. This drug is so evil they will continue to do it until they say it's time to stop, and by that time it could be too late. People ask me all the time why don't I just leave? Why don't you leave and find somebody new? Simply because if this was me and I was struggling, would you give up on me?

Now to be honest with you, If I could see the future when I met him a year ago, I would have looked the other way and wouldn't have even acknowledged him. This may sound selfish, but to live in constant fear every day is something I wouldn't want anybody to ever have to do. Now don't get me wrong. I am so happy to be starting my life with such a loving, caring, ambitious guy despite the addiction. I am head over heels in love with him. He goes above and beyond for me. He doesn't hurt me physically and the only way he hurts me emotionally is lying. I am glad I did not turn the other way though because I would have missed out on an amazing 9 months with somebody that I love so much. I'd also miss out on forever with him and our daughter.

He is going to be a great father and husband regardless of this disease. Because that's all it is, a disease. A disease that can't and won't stick around forever