People knew him for his insane sense of humour (after they learned not to be AFRAID of his sometime brooding persona). For 3 of his years in recovery he had no car or license, but managed to get rides to meetings EVERY day, sometimes 2 per day, because people loved to be entertained by him. Friendship was everything to him. He adored women, had countless women friends. Texting and Facebook were made for him. All his friends tell me they miss his texting them a hundred times a day. How he had time to do that between so many face book posts, working and going to meetings, I don’t know…
Because of his addiction, depression, and self esteem issues, Sean’s main regret was never getting to have a close relationship with his son. When Sean got into recovery, he sued his ex for custody and won, but was afraid, by then, to upset Kenny’s life by taking him away from his maternal grandmother, with whom he had the only stability he had ever known. I think Sean was afraid he might infect him somehow.

Sean had an IQ of 160, but he also had ADD, before anyone was familiar with it. So he had difficulty bothering to sit in school. He quit HS, took the GED, and scored in the 98th percentile. He had started as a young teen with weed. Eventually he went on to PCP and crack. Later he told me he never met a drug he didn’t like, but was afraid of needles. In rehab at 18, he learned some things, but it didn’t “take”. He was diagnosed with depression at that time. Sean worked hard most of his life, he absolutely loved hard physical labor and had the strength of a bull. When he was in recovery, I asked him how he managed to work (aside from stints in jail)) the whole time he was using. He told me that it was his “hustle”. He wasn’t good at shoplifting, he wasn’t a prostitute, and couldn’t do armed robbery. (Not that our cash, and his brother’s things didn’t turn up missing occasionally.)
He didn’t try heroin until in his 30’s when he met a beautiful heroin addict with whom he became obsessed (She is now clean). He kicked cold turkey several times, started “coming around” to meetings on & off for a few years (between overdoses and suicide attempts and jail time). The last straw; he robbed his little brother’s house, I cut him off and told him none of us ever wanted to hear from him again unless he was clean, or dead. To our surprise he went into recovery and called when he had 6 months clean, which lasted for 5 years. His first sponsor, Chuck, made such a huge impression on him. Chuck knew how to address the mental illness AND drug addiction. But, when Sean had only 6 months clean, Chuck was killed in a motor cycle accident on the way home from a meeting, right in front of the car Sean was in. Still, Chuck had taught him enough that he was still able to stay clean through all his grief. Sean sponsored people; got his own apartment, attended church, and fell in love with a brilliant, devout young woman. Unfortunately this did not end in marriage, as he had hoped. They had different goals. She left to teach in Asia, and he spiraled into depression and eventually relapse. He managed to get back into recovery for 6 months, even start dating a really sharp girl, but then heard she was back for summer break. His mental illness took this as a sign, he checked himself into the psych ward, and a week after release, he overdosed for the last time..

Talking with his son. His friends. His friend’s babies. New phones. Winning word or trivia games (as he did constantly). Playing spades. Cooking. Getting to drive a new car; anybody’s new car.

Sean was my oldest. I had him when I was 15, and I was 61 when he died. In a way he defined my life, since we grew up together. He could find humour in ANYTHING and make me laugh, even if I was mad at him. I miss the way he would try to contain his own laughter (especially when it was inappropriate), but it would BURST out of him. I miss his intelligence and encyclopaedic knowledge (from voracious reading, not from school), I could call him any time I was stumped on something, especially history or music (his favourite things) and he would always know the answer.

If only you could have seen hundreds of your devastated friends, most of who are in recovery, and their families, who came to thank you for being there for them. I just wish you could have separated your self-worth from the objects of your obsession/affection. They did NOT determine your value. And I would tell him Kenny loves him and does miss him, more than he could imagine, as do I. 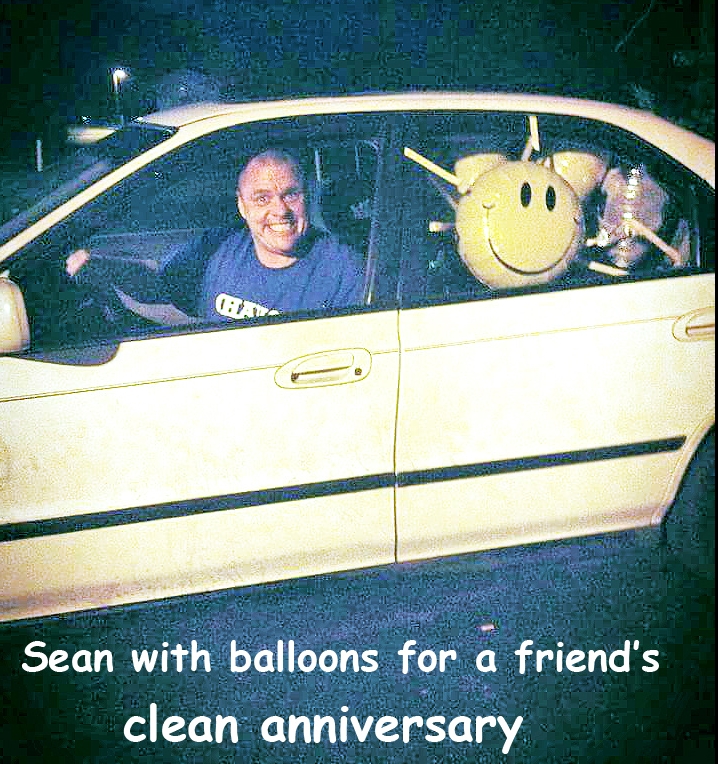