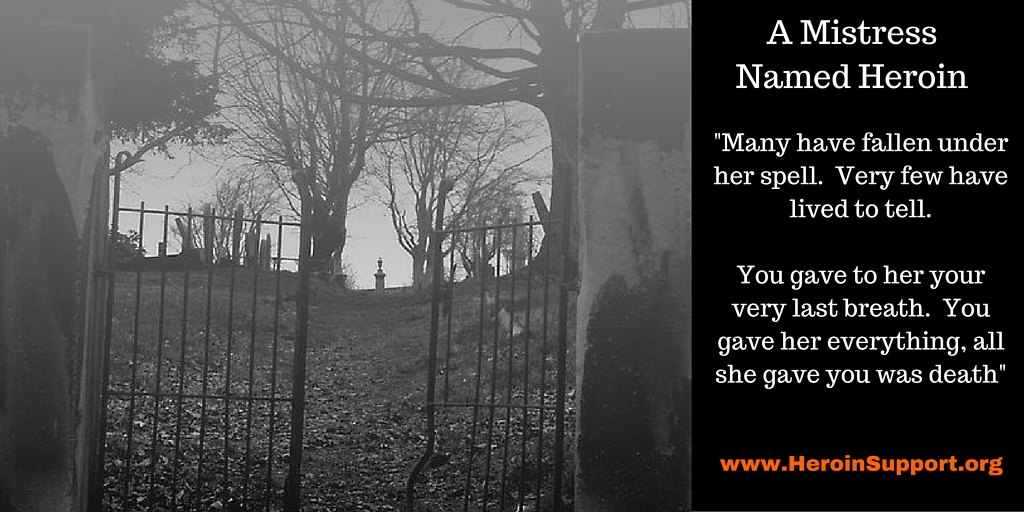 You said hello and soon she became your mistress
Guess it's true what they say, ignorance really is bliss.

It was hard to watch, you were her slave
She was seductive, She was all you could crave

When you had her in your arms, you couldn't let go
But her love wasn't real, it was just for show

Did she make you believe you could fly?
When I told you not to even try?

Her and I played a game of tug of war
To me, you were always worth fighting for

Finally, you ended the torrid affair
But she knew you'd be back, so she didn't care

I thought she was finally gone from your life
Gone, since the day I became your wife.

One day you went back to her, she knew you would
She took you away from me again, this time for good

But her intentions were cruel and her soul was black
Once you follow her path, you can never go back

You gave to her your very last breath
You gave her everything, all she gave you was death

It's over now and this pain I will endure
For we will be together again, of that I'm sure

She thought she won, thought she reached her goal
She took away your body but she can never have your soul

Now we are apart, but it's just for a little while
And when I see you again, I'll be wearing the biggest smile.

Tweet
How do you feel about this post?
Happy (0)
Love (0)
Surprised (0)
Sad (0)
Angry (0)
Tags:
Poems Addiction
Heroin - The Plague
I Never Met an Addict Who Wants to Be On Heroin